Again this is another re-post of something I posted in other forums some time back in the “RIM should have thought of this first!” series.

This episode has to do with the fact that I am a minimalist. My wallet is a small little box that carries just want I need, I only have 3 keys on my key chain one of those being a USB key.  So when I started my job as an IT administrator and was given my security card, I found this card was too big to fit in my wallet case and I didn’t feel like putting it on a retractable reel clip (those small little pull strings clips you put ID cards on) or a lanyard. I remember a mod that I did some time back with another company. They handed out little Key Fobs which was nice but still a little to much for me. I cracked the case on the FOB removed the RFID transmitter and placed it in the recessed area in the back of my watch under the backing. This was great I could just swipe my wrist by the receiver and it worked wonderfully. Of course no two security systems seem to have the same RFID frequencies and such, I could not just use the existing watch with the new work place.

With that background I started to think how could I incorporate this new card into something. It had to be something that I had with me every day. The only thing I could think of was my BlackBerry Bold. After doing some measurements and tests I determined that it was possible. So I started to build my list of stuff I required

I first I started off by separating the two layers of the security card. With our cards there is a hard plastic shell and a overlay sticky protective backing. Be careful when separating the layers, sometimes the wire is stuck to the sticky side and you can damage the wires that run to the RFID transmitter. After you have removed the backing you should have something that looks like the image below. 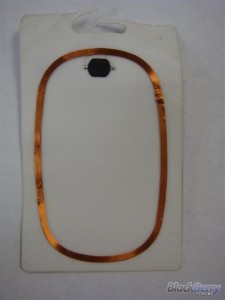 I then used an exacto knife to slowly seperate the wire from the casing. WARNING!! Be very careful when you get to the top where the RFID chip is. The wires here are very thin and delicate and can break very easy. 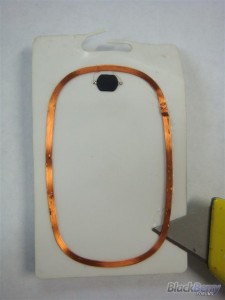 I placed the removed wiring into the back of the Bold battery covery to test placing to make sure it was not causing any issues with clearance. If you are wondering what the washers are for in the picture please refer to Episode 1 of RSHTOTF where I explain what they do. 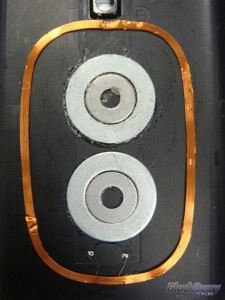 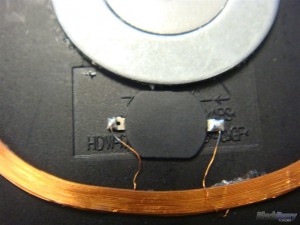 After i was happy with the location I took the wiring out and placed it upside down on an 8.5 x 11 sheet of paper. I then took my spray glue (this was an extra step I took to secure it you do not have to do this step if you dont want) and sprayed the back of the wiring and RFID Transmiter. 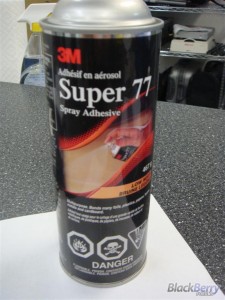 I then placed the wiring in the back of the Bold battery cover and when it was in the proper place i took a peace of packing tape to protect the RFID and wires. 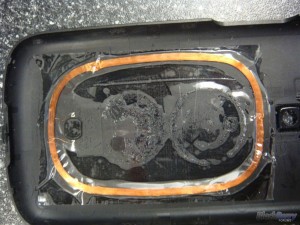 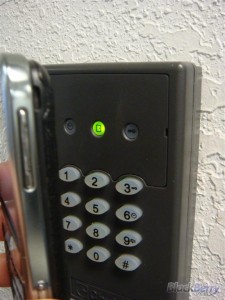 As you can see with some distance I was still able to use my RFID through the battery cover. Note that I have to face the back of Bold to the pannel to get it to work. The signal just is not strong enough to penetrate to the front of the device. I alos have tested to make sure it does not effect the signal strenght of the Bold. I have the engineering screens on my BlackBerry and did some testing witht he signal strength numbers up (there is also a keyboard shortcut to do this ALT+NMLL this is a toggle so doing it again reverts it back) removing and replacing the battery door had zero effect on the numbers. I tested this in many different locations to ensure.

2010.11.08 – Update – So I have switched device to the Torch 9800 and I needed to do a bit of correcting to get the RFID to work in my new device. The first was that I needed to make my RFID installment more portable in case I needed to switch it to a new device. The easiest way I found to do this was to place the whole thing between 2 pieces of tape! Why didn’t I think of this before! It was so simple. As well I decided to place the number for my card in sharpie as this is sometimes good to know.

I have done some testing and found that it works beautiful. This new change now allows me to move the RFID chip from phone to phone and it also it protects the wires from being broken if you are not that careful. 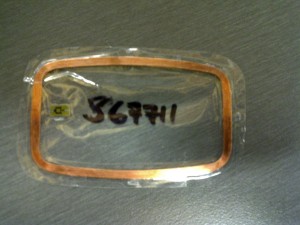