Hey everyone, just got my BodyGuards Carbon Fiber Armor in the mail yesterday and just thought I would share. I decided to go with the Armor because I was looking around for a way to just make my PlayBook unique and a way for it to not get lost in with the other PlayBooks on my desk at work. I had seen a video before of someone applying the Black Carbon Fiber Armor to the PlayBook, as much as I liked the black look I thought white would just pop better. I normally use a soft shell case with the leather flip over to transport my PlayBook in but when I use the device it feels way better in the hand naked. The BodyGuardz Armor way a way to protect the device out of its soft shell but and still have it able to go back into the soft shell when required. I did a bit of looking around the net and there are quite a few choices out there for the PlayBook. I first looked at skinit but they were more like a sticker then an armor. The prices were all around the same cost as well. I eventually decided to go with BodyGuardz because I had a $6 off code, shipping was a decent price ($7) and I personally just like the texture of the Carbon Fiber Armor.

Once I placed the order it came in the mail in about 2 weeks (remember this is from the US to Canada during Christmas, the busiest time of the year for post office) I decided to tape the application of the Armor to show everyone else that would be interested in purchasing in it. Once it was applied I was not to happy with that hole in the center because it looks like crap with the black showing through. I know it is so the BlackBerry emblem shows through but sorry it looks cheep. I am a huge RIM supporter but I don’t feel I have to show the emblem on everything I own it is okay to cover it up. So they decided to not cover the emblem but the rest covers the serial number and the 64 GB label. I think these details are more important to have showing then the emblem but that is only my personal opinion. With that aside the PlayBook looks really nice and slick with the Armor on and I was quite happy with my purchase.

Post surgery!
After 1 day with the Armor on and taking it in and out of my soft shell, I decided I came to a conclusion. The sides of the Armor need to go! So I got out my scalpel and a steel ruler and made very light cuts to all the side flaps. I would have liked to have done this before it was applied as the cuts would be a lot easier but this is what I do. I also don’t think it added that much more protection to have them on the sides as they only wrapped around and were just below the screen line. So even if i dropped my device on its edge it would not protect the screen. The cuts I made were with a very sharp scalpel and were very light and shallow and the excess Armor just peeled away. The cuts ended up looking really good as I followed the straight edge coming from each corner to the next making it look professional. The only problem was now is is that now I could see how crooked I put it on, doh! Because the Armor is not exactly a sticker I just pealed it off carefully, re-centered it and I looks amazing now. Have a look at the picture below to see how better it looks with out the side flaps! 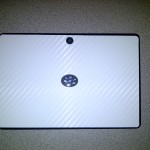 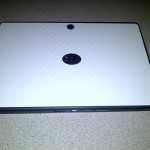 Summary
I would suggest the BodyGuardz Armor to anyone if they ever asked what they should get but I also have not personally seen other ones yet but so far I am happy with my purchase. Below is a summary of the pros and cons I feel about this purchase:

Pros:
The Armor looks really good on the device
It was very easy to apply
It could be removed if not perfect and reapplied

Cons:
The price was a little high at $29.99 US
The free screen protector it came with was junk in my opinion made the screen look horrible and cheep
The cuts in the corners make it look cheep after a while
When taking the PlayBook out of my soft shell the armor always gets caught on the edge and peels it off a bit (found a way to fix)