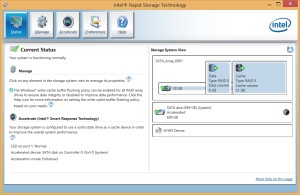 Okay I have found another issue that I hope I can help everyone else with should they have the same issue. If you just want the solution and want to skip the story click here..

At work we got in these beautiful new Dell XPS 14 Laptops, Dell has finally started to make some nice machines when they came out with the XPS line-up. We have had a lot of people in house comment that they thought it was a Mac Book Pro or Mack Book Air. These new XPS 14 laptops come with a new technology built on board called “Intel Responsiveness Technology” or IRT for short. The point of this technology is to make your system faster by using a small independent mSATA Solid State Drive or a slice of a larger SATA SSD. There are 3 different technologies that apply here:

Nice reference table of what’s possible depending on your drive:

Now this all sounds great right? It’s like a Hybrid drive and it will speed up my system! You are correct this is exactly what it does…. when it’s setup and running correctly! I say this because there seems to be a lot of issues and confusion getting this technology to work. If you need to reinstall your OS, or you need to replace the SSD that holds the special partition for this to work, or if you need to replace the hard drive that is being accelerated it seems to break everything. For me this has resulted in blue screens of death and just random crashes. It seems that once ISRT is setup it does not like it when you change anything to do with the configuration. I found this out the hard way…

When we received these XPS 14 laptops from Dell, their factory image was just a single C Drive with a recovery partition. If you have read my other posts I like to separate User data and OS data by moving the Users folder to the D drive this simplifies backups for us.  The problem with the Dell image is that there is no D drive and it did not come with media to re-install Windows. The XPS 14 only comes with software that allows you to create a rescue flash drive that is an exact copy of the current image.  To be honest using the Dell stock images are really good. There is not much bloat ware you just need to removed a few piece of software. I decided to just modify the Dell image and work with what I had. The XPS I received came with a 500 GB HDD, to get the desired space for D I needed to re-sized the C drive down to 75 GB and than partition the remaining space for the D drive. This was a simple process using Windows Disk Manager. After I rebooted and logged into my desktop Intel Rapid Start Technology program threw up an error

Your system does not appear to have Intel Rapid Start Technology enabled.

I knew from my limited knowledge of Rapid Start that it must be enable in BIOS so rebooted the machine to look and I did confirm that the option for Rapid Start Technology was greyed out and there was no way to enable it. Very strange all I did was resize my OS drive. Maybe the software had issues after resizing the partition? I tried to re-install the Intel Rapid Start software but got then error

This computer does not meet the minimum requirements for installing the software.

Well the rabbit hole just keeps getting deeper. Most people would just quit at this point and restore to a previous image. For me this was just another challenge. With that very informative error I had to look up on the internet and do a bit of reading to figure out why I got this error. I found out that Rapid Start is expecting a very particular partition with a certain ID. For some reason this partition was not being seen by the BIOS so that is why the option was greyed out. I also could not re-install the software because the setting in BIOS was disable. What it sounded like was all I needed to to do is re-create this partition and then I could enable it in BIOS again and install the software.

Throw Another Wrench in the Cogs

This is where I really started to run into issues, most of the Intel documentation that I read only talked about Rapid Start but not in conjunction with Smart Response, I did read that it was possible (I also knew it was because my laptop came with both working) but could not find a document the explained how to setup both. No matter what I did to setup this Rapid Start partition I could not get it to work so I figure that maybe I should start with Smart Response.

An error occurred and the selected disk or volume could not be accelerated. Please restart your computer, and then try the operation again.

I rebooted my computer and then ran the tool again, when I looked this tool had created a 18.6 GB partition on the SSD and it was all setup other then the acceleration needed to be enable on the HDD. So I selected my 500 GB drive and said accelerate only to get a different error

An unknown error occurred while an operation was in progress. The operation could not be completed.

I kept going in circles trying one thing then trying another. Seeing if different BIOS settings would change anything. I just kept getting the same errors. At this point I even tried to use the Dell USB image to bring the system back to a factory image but the problem still existed. I even called Dell to ask about this issues and got the response “This is a factory only setup, you must return it and we will ship you a new one” That really scared me to think every time I had an issues with the Rapid Start that I would need to return it to Dell. So it really looked like I would need to return the computer or fix the issue.

A Spark in the Dark

After some more digging on the internet I did find a post that mentioned that re-sizing your OS partition would fix this problem. There were many posts under suggestion saying “thank you it worked!” I was very hopeful, I opened Disk Manager and shrunk my C drive down by 1 GB but and tried again…. still the same issue, damn… I give up!!! I even started to use a fresh install of Windows 8 using a removable USB DVD drive and media I bought from Dell for the computer after this issue started to see if a fresh install would fix it. I kept looking on the internet for more information. I read every Intel document on it. By the end I felt like I was an expert in something that just would not work!

After almost giving up and sending back every Dell XPS 14 we had in house, telling Dell that they are not business friendly, I decided to play around a little more because I can figure out most things and I didn’t want to be defeated. Instead of doing my typical C drive D drive setup I thought “Lets take a variable out of this equation”.  I re-installed Windows with just a C drive across the entire HDD. Once I re-installed, I tried setting up the Smart Response again with no luck but decided to try the method of re-sizing the drive. What the heck!! it worked!!!! I could now enable acceleration of my drive, I did some playing around and no matter what I did I could not break it from working again, I could destroy the Acceleration settings and set them up again, I could re-size, create new partitions, it would not break. I was on the right path now!!! I did a setup of Windows 8 again but this time made a D partition during the setup and then tried to re-size the C drive, but this time it did not work. After doing some testing I realized that it is not the C drive that you need to re-size but the drive that it touching the end of the disk which in this case was my D drive. I was now able to replicate and fix this issue each time. I am still not sure what re-sizing does to the drive but it must change a bit somewhere that allows the software to do its work. I was then able to create my Rapid Start partition which allowed it to be enabled in BIOS and then I could install the software.. SUCCESS! I decided to post this because I know a lot of other people might want to know the steps I took to fix this on 7 different XPS 14 machines we had in house. I have placed the exact steps I take to fix the issue now.

When using Rapid Start and Smart Response there is an exact order that you must follow because installing Smart Response can destroy all the partitions on the SSD.

Now that the Smart Response is up and running we can create our Rapid Start Partition. Intel recommends making this partition the same size or more as the amount of memory that is installed in your computer.  They recommend just making a 8192 GB partition as this will always work for all configurations but you can play to see what works best for you!

I would please ask anyone for feedback if this does not work for you or if it does! I found this solution work in every case for me across all the machines we had with this issue. I can get most machines to a point where I cannot break it again! I don’t know why but I will accept the outcome!