I have always been the type of person to try and make my life easier. That would mean adding things like a keypad to my house dead bolt lock so I don’t have to carry as many keys, adding a magnetic mount for my device so I just pop my phone on and off any where I am, my bed side stand, car and even at work (iOMounts). I am always looking for way to reduce the amount of crap I have to carry on my person. If you work in enterprise most people are given a security fob to let them in to the building before or after hours, I have even seen some apartments start to use these RFID style cards. These fob cards get lost or damaged very easy because you always have to have it with you, it’s just a thin piece of plastic, if you put it in your wallet it cracks easy and they are the size of a credit card but ours are twice as thick as one. You might remember a long time ago (if you follow me) I did a post called “RSHTOTF! – Hack A RFID Into The BlackBerry” these were my “RIM Should Have Thought About This First” series. In these posts I came up with amazing ideas that I wished RIM now BlackBerry had added to their devices. Looking in my office desk the other day I found the card that I had used in that hack. I sat wishing that I had a removable battery cover on my Priv so I could put this inside it. Then it dawned on me, the whole back of the Priv comes off and there is lots of room back there to add it!! Here we are again hacking away at a device to make it do what I want, whats wrong with me ?

I removed the back to expose the inside. I had to be careful not to cover the existing NFC coil as I am not that sure about signals from NFC and RFID fighting each. I did some testing while taped to the back of my phone with no back on it. The battery seems to really interfere with the RFID signal. As soon as I exposed 10% of the coil off it it worked perfect. So i positioned the chip at the bottom where the USB port is and made sure I didn’t cover the connection to what looks like little antennas. I placed the back cover on and now I have an embedded security fob in my device that is always on! 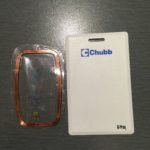 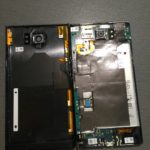 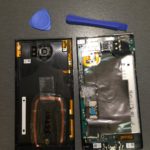 Click the images above to get a larger version.